We Will Make Tulo Safe Again

In the aftermath of the Liberation Day attack committed by the Rogue, Command tries to help Tulo City rebuild, yet Ajay Ambers unravels in the face of what he’s done to those he loves.

Caught between grief and fear, he tries to flee but soon finds himself in even darker territory, trapped with people driven only by hate.

Meanwhile, his girlfriend Genni is left behind in the debris of his lies. Unable to move on, she risks her own merit score and digs deeper into Ajay’s past on the Side, making harrowing discoveries about the merit-making society she’s been raised to respect.

As they begin to question the system they live by, one that labels them Worthy or Unworthy, Ajay and Genni must decide what sort of people they want to be . . .

The second in the Merit-Hunters Series, Stolen Crowns continues the dystopian adventure about an intense and gruelling working world.

Praise for Crowned Worthy - Book One of the Merit-Hunters Series

"Crowned Worthy is a brilliant book! I found myself hooked from the very beginning, especially because the world the author builds carries a lot of resonance to many tendencies we see in our society today...Really good stuff from LG Jenkins and I can't wait for the sequel!" Ben, Amazon

"This dystopian style novel had me hooked from the start. The small contrasts to reality were relatable and had a 'black mirror' vibe to the storyline. The author balanced the main character for you to love/hate perfectly with an underlying personality that you wanted to discover deeper. I can't wait for the next novel in the series." Luke, Amazon

Want both books in the series for a better price? 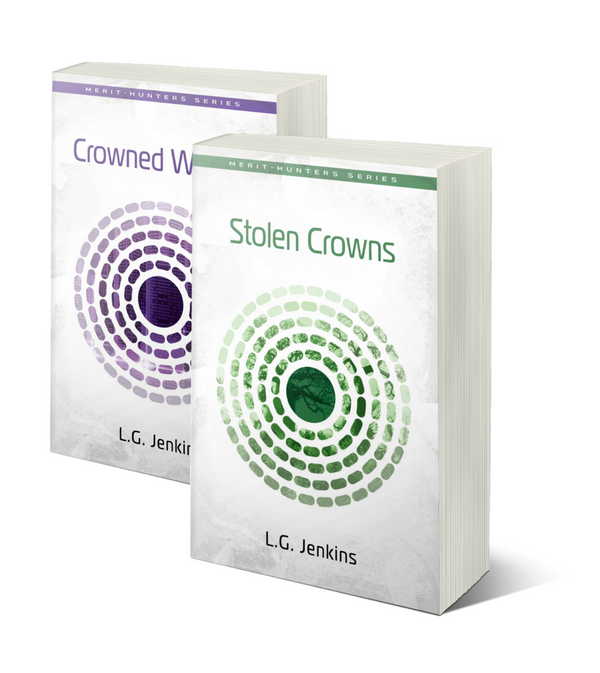 Get both signed books in the merit-hunters series by L.G. Jenkins for a better price.

The first in the Merit-Hunters Series, Crowned Worthy explores themes of success, work, faith, and relationships in a society controlled by technology.